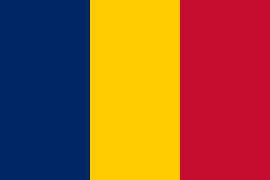 The flag of Chad consists of a vertical triband of blue, gold, and red, mimicking the flag of France but with Pan-African colors. Blue represents the sky, hope and the south half of the country, which is relatively lush. Gold represents the desert and the sun and the north half of the country, which is mostly desert. Lastly, red represent the bloodshed in the fight for independence. This flag is the same as the flag of Romania, with the only difference being the shade of blue, and was adopted on June 11th, 1959.