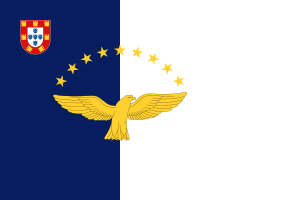 The flag of the Portuguese Territory of Azores consists of golden hawk under a semi-circle of 9 five-point stars on two unevenly sized regions, one dark blue and one white, separated vertically. Also, in the flag’s canton, the top left corner, exists the Portuguese national shield. The nine stars represent the nine islands that make up Azores. The hawk, specifically a goshawk, is a symbol of the territory. Lastly, the colors of blue and white and the shield represent the regions connect to Portugal, blue and white being the colors of a previous flag of Portugal. This flag was adopted on April 10th, 1979.