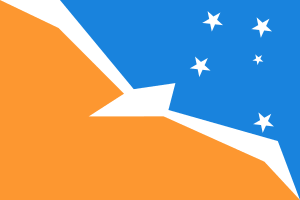 The flag of the Argentinian Province of Tierra del Fuego consists of a white albatross with wings spread diagonally across the flag separating two regions, one of orange and one of blue with white stars in the shape of the Southern Cross. The orange region represents fire and is shaped into an outline of the province. The blue region represents the ocean and the sky. The albatross is a coming bird of the province and its flight represents freedom. This flag was adopted in June of 1999.