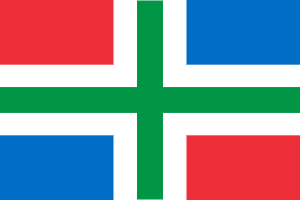 The flag of the Dutch Province of Groningen consists of four rectangles, two red and two blue, separated by a thick white cross with a thinner green cross within it. The province of Groningen contains two historical regions of the city of Groningen and the surrounding region of the Ommelanden. Green and white represent the colors of the city, and red, white, and blue represent the colors of the Ommelanden. Moreover, the green and white crosses are centered on the flag to represent the important the city has to the entire region. This flag was adopted on February 17th, 1950.