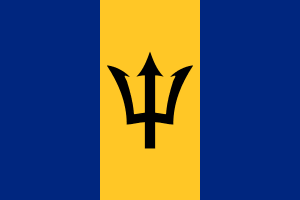 The flag of Barbados consists of a vertical triband of blue separated by gold, with a black trident head in the center. Blue represents the ocean and gold represents the sand. The black trident head, call the Broken Trident, is purposely missing its staff. This represents Barbados’ break from being a colony, thus becoming an independent nation. The three points of the trident represent the three principles of democracy: government of the people, government for the people, and government by the people. This flag was adopted on the island nation’s first Independence Day, November 30th 1966.