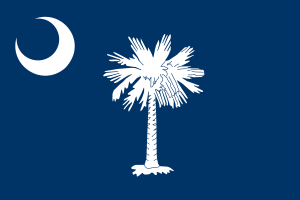 The flag of the US State of South Carolina consists of a white crescent and palmetto tree on a dark blue background. This flag was designed in 1775 by William Moultrie as a flag for the state’s troops during the US Revolutionary War. Moultrie chose blue because it matched the color of the soldier’s uniform. The crescent and tree are also symbols from the revolutionary war. This flag was officially adopted on January 28th, 1861.