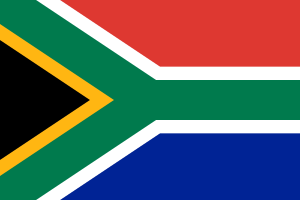 The South African flag consists of a horizontal Y shape that separates three regions of red (top), blue (bottom), and black (left). The Y shape is also bordered with white on the top and bottom and yellow on the left. According to Frederick Brownell, the designer of this flag, there is no official meaning to each color of the flag, but it does represent the country’s flag history. It was adopted on April 27th, 1994.