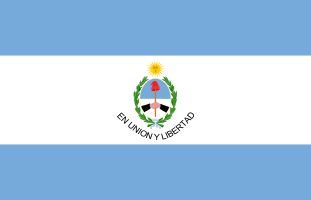 The flag of the Argentinian Province of San Juan consists of three horizontal bands, two light blue bands separated by a slightly larger white band, with province’s coat of arms and the words “EN UNION Y LIBERTAD”, which translates to “In Union and Freedom”, in the center. The province’s coat of arms consist of two shaking hands in front a of vertical pike with a Phrygian cap on top of it. This is surrounded by a wreath and has the Sun of May above it. The reverse of this flag consists of the same three horizontal bands with a golden sun with 32 rays in the center. This flag was adopted on December 11th, 1997.