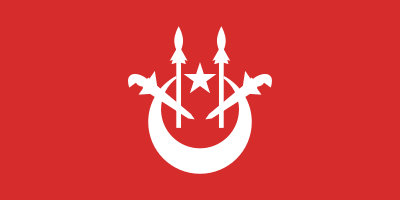 The flag of the Malaysian State of Kelantan consists of a white emblem, which is part of the state’s coat of arms, on a red background. The emblem consists of a crescent, a star, two spears, and two daggers. The crescent and five-point star represent the religion of Islam. The spears and daggers are traditional weapons of the Kelantanese people. Red represents the sanctity of the office of the Ruler. This flag was adopted in 1924.