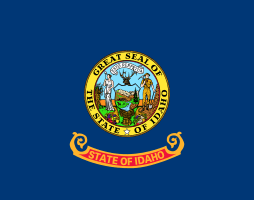 The flag of the US State of Idaho consists of a blue field with the state seal and a gold and red banner with the words “State of Idaho”. The state seal consists of a woman, representing justice, on the left and a man, dressed as a miner, on the right. Between the two supporters rests a shield with images that represent the state, such as a pine tree, a plow, and a river. The seal also contains a white banner with the latin phrase “Esto Perpetua”, which means “It is forever”, and is surrounded by the words “Great Seal of the State of Idaho”. This flag was adopted on November 2nd, 1957.