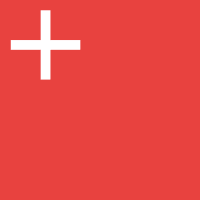 The flag of the Swiss Canton of Schwyz consists of a thin white cross in the upper left corner of a red square field. A red flag with a white cross was the battle flag of the Holy Roman Empire during the 12th century. Red represents sovereignty and power over life and death, and the white cross represents the Christian religion. In 1291, Schwyz joined the Swiss confederation and this flag became the official flag of the Canton.