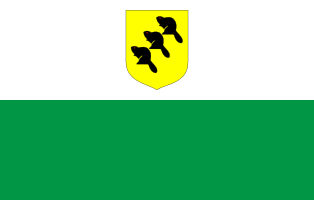 The flag of the Estonian county of Põlva consists of two horizontal bands of white and green with the county’s coat of arms, a gold shield with three black beavers, centered in the white band. There are three beavers because the county is formed by three municipalities. Beavers are used to represent the people of the county, who are tough and hard-working. This flag was adopted on November 7th, 1996.