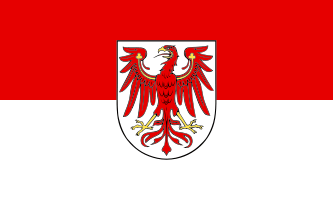 The flag of the German state of Brandenburg consists of two horizontal bands of red and white with the state’s coat of arms, a red eagle on a white shield, in the center. The use of a red eagle dates as far back as the 10th century, when the Saxon leader Gero used it. This flag was officially adopted as a state flag on January 30th, 1991.