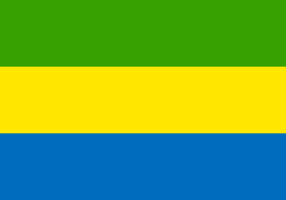 The flag of Gabon consists of a horizontal triband of green, yellow, and blue. Green represents the natural resources of the region, including the forest. Blue represents the ocean, specifically the Atlantic Ocean, and yellow represents the sun. The yellow band, which separates the green and blue bands, represents the Equator, which goes through the country. This flag was adopted when Gabon gained their independence from France on August 9th, 1960.