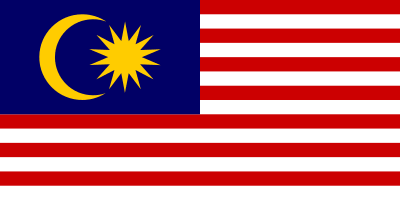 The flag of Malaysia consists of 14 alternating red and white stripes with a blue canton containing a yellow crescent and 14-point star. The 14 stripes represent the states and the federal territories of Malaysia, while the 14 points on the star represents the unity between these states and territories. The crescent represents Islam, the country’s official religion. Blue represents the unity of the people and yellow was is used by the royalty of the region. A similar flag, with an 11 point star and 11 stripes, was approved in 1950, and the current flag was officially adopted September 16th, 1963.