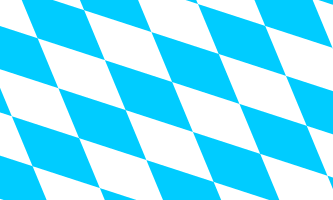 This flag of the German state of Bavaria consists of light blue and white diamonds. There can be any number of diamonds more than 21, with larger flags often having more. This design is historically associated with the royal Wittelsbach family, who ruled the region from 1180 to 1918. This one of two official state flags of Bavaria, and it was officially adopted on November 16th, 1953.