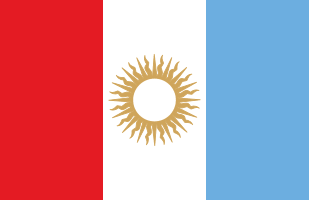 The flag of the Argentinian province of Córdoba consists of a vertical triband of red, white, and light blue with a gold Jesuit Sun. The Jesuit Sun is a portrayal of a sun with 32 rays, alternating between wavy rays and straight rays. Red represents spilled blood, white represents the identity of the people, and light blue represents national independence the rivers of the province. This flag was adopted on December 16th, 2010.