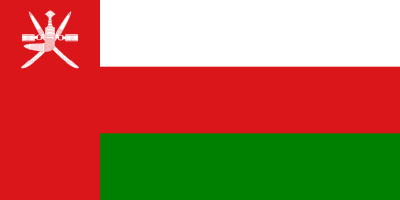 The flag of Oman consists of three horizontal bands of white, red, and green with a vertical red band on the left and the national emblem of Oman in the top left corner. White represents peace and the Imam, the religious leader of Oman. Green represents the Green Mountains, a mountain range in Oman. Red is a common color of Gulf State flags. The national emblem consists of a pair of crossed swords and a curved dagger, historic weapons used by the people of Oman. While similar flags have been used since 1970, the current version of this flag was adopted on April 25th, 1995.