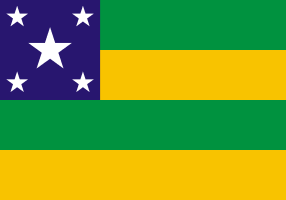 The flag of the Brazilian state of Sergipe consists of five white five-point stars on a blue canton and four alternating green and yellow bands. The colors used are the national colors of Brazil. This flag was originally adopted on December 19th, 1920. In 1951, the flag was changed to a similar flag with 42 stars, but on December 3rd, 1952, the original flag was re-adopted.