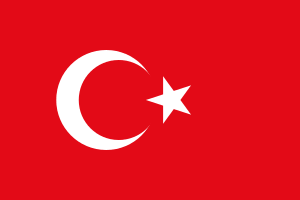 The flag of Turkey consists of a white crescent and five-point star on a red field. It is very similar to the flag of the Ottoman empire from the 19th century. Red has been used in a lot of Turkish flags, dating back as far as the 14th century. The star and crescent are symbols of Islam, the majority religion in Turkey. While this flag is similar to the flag the Ottoman Empire, it was officially adopted as the flag of Turkey on June 5th, 1936.