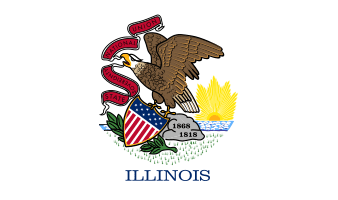 The flag of the U.S. state of Illinois consists of the Great Seal of Illinois above the word “ILLINOIS” on a white background. The seal, which was designed in 1819, consists of an eagle with a banner in its beak, perched on a rock and a United States shield. The banner has the state motto: “State Sovereignty, National Union” and the rock has two dates, 1818 and 1868. 1818 is the year the Illinois became a state, and 1868 is the year the seal was adopted.This flag was adopted on June 27th, 1969.