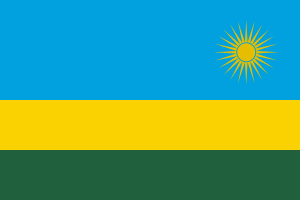 The flag of Rwanda consists of three horizontal stripes of blue, yellow, green with a yellow sun with 24 rays in the top right corner. The blue stripes, which is twice a high as the other two stripes, represents peace, the yellow stripe represents wealth, the green stripe represents hope, and the sun represents enlightenment. This flag was adopted on October 25th, 2001 when it replaced the previous flag, which had become associated with the 1994 Rwandan genocide.