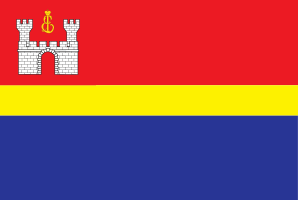 The flag of the Russian oblast of Kaliningrad consists of three horizontal stripes of red, yellow, and blue with a castle and a stylized letter E in the upper left hand corner. The middle yellow stripe has one-third the height of the red and blue stripes. The stylized letter E represents Empress Elizabeth Petrovna, who was briefly a ruler of the region in the 18th century. The castle, whose gate is open, represents hospitality, blue represents the sea, yellow represents wealth, and red represents work. This flag was adopted on June 9th, 2006.