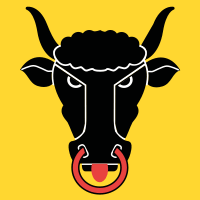 The flag of the Swiss canton of Uri consists of a bison’s head with a red tongue and red nose ring on a yellow background. The bison is an aurochs, which is an extinct species but was believed to be plentiful in the region in the past. The bull is a royal symbol and a symbol of the god Cernunnos. This flag has been in use since the 13th century.