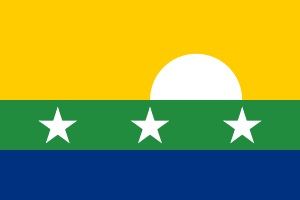 The flag of the Venezuelan archipelago state of Nueva Esparta consists of three bands of yellow, green and blue. The upper yellow band, which has double the height of the other two bands, have a white semi-circle resting on its lower half and offset to the right, and the green band contains three white five-point stars. Yellow represents the rices of the islands, green represents hope and fertility, and blue represents the ocean. The three stars represent the three islands that make up the state, and the white semi-circle represents the rising sun. This flag was adopted on August 10th, 1998.