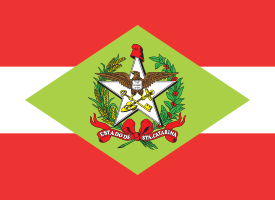 The flag of the Brazilian state of Santa Catarina consists of the region’s coat of arms on a pale green parallelogram centered on three horizontal bands of red, white, and red. The coat of arms of Santa Catarina consists of an eagle with outstretched wings, within its right claw a key and within its left claw an anchor, on a white star. The star is encircled by two branches, wheat on the right side and coffee on the left side, tied together at the bottom by a red banner that reads “ESTADO DE STA CATARINA”, which translates “State of St. Catarina”. Lastly, the white star has a red Phrygian cap on the top of it. This flag was adopted on October 29th, 1953.