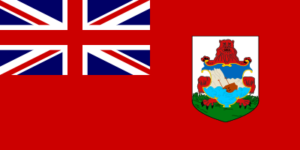 The flag of the British territory of Bermuda consists of a Union Jack in the top left corner and the coat of arms of Bermuda on a red background. The coat of arms of Bermuda consists of a red lion holding a shield with the image of a shipwreck on it. The red lion and the Union Jack represent Bermuda’s relationship with Great Britain. The shipwreck on the shield is a French ship that was lead by Captain de la Barbotiere. In 1593, this ship struck a reef off the coast of Bermuda and some of the ship’s crew made it ashore. This flag is unusual as most British oversea territories have a blue background. This flag was adopted on October 4th, 1910.