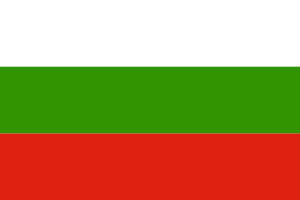 The flag of Bulgaria consists of a horizontal triband of white, green, and red. White represents peace, green represents fertility, and red represents courage. This flag is similar to the Russian flag, which uses blue instead of green. Until 1991, when this flag was adopted, Bulgaria used a flag with the same horizontal triband, except it also included a emblem with a lion head.