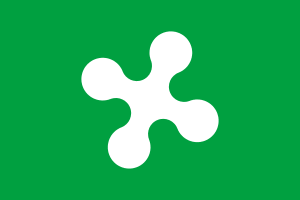 The flag of the Italian region of Lombardy consists of a white Camunian rose on a green background. A Camunian rose is a particular symbol found on rock carvings in the Lombardy region that date back as far at the 7th century BC. This symbol was adopted as an official symbol of the region on June 12th, 1975.