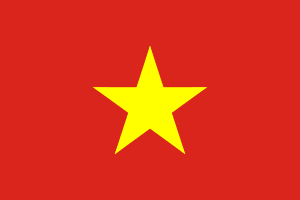 The flag of Vietnam consists of a five point gold star on a red background. The red background represents the goal of the social revolution. The five points of the star represent the five classes of Vietnam society: military personnel, businessman, workers, farmers, and intellectuals. This flag was first used during an uprising against French rule in 1940 and was officially adopted on September 5th, 1945, three days after the country gained its independence.