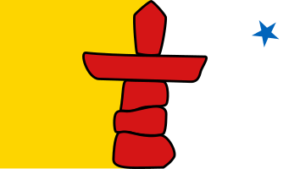 The flag of the Canadian territory of Nunavut consists of a yellow and white background vertically separated by a red inuksuk, a man-made stone landmark, with a blue five point star in the top right corner. The color yellow represents the sunrise, white represents the snow, and the blue star represents the North Star. The red inuksuk represents the Inuit people, who were the traditional natives of the region and represent the majority of the local population. This flag was adopted on April 1st, 1999.