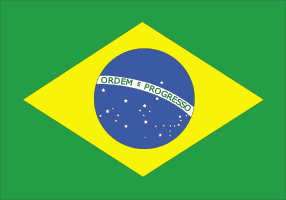 The flag of Brazil consists of a starry night on a blue globe with a banner saying “ORDEM E PROGRESSO”, which translates to “Order and Progress”, across the equator. The starry blue globe is on a yellow rhombus, which is on a green background. On November 19th, 1889, this flag was adopted with 21 stars in the globe. An additional star was added in June of 1960, and again another star was added on May 28th, 1968. On May 11th, 1992, the location of the stars was altered and four more stars were added, bringing the total number of stars to 27.