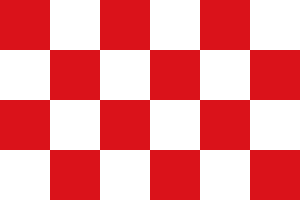 The flag of the Dutch province of North Brabant consists of checkered pattern of 24 red and white squares in a four row by six column pattern. These colors and pattern had been used since the 10th century but the flag was officially adopted on January 21st, 1959. Check out Flagsplosion, a flag identifying endless quiz. Now available on Steam and Google Play!