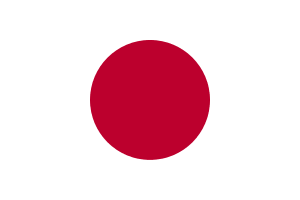 The flag of Japan consists of a red sun centered on a white background. Japan, being known as the Land of the Rising Sun, has a long had connections with the sun. For example, the Emperor of Japan is said to be a direct descendant of the sun goddess Amaterasu. This flag was adopted on February 27th, 1870, with the official design placing the red sun 1% to the left of center horizontally. Due to more and more use of digital symbols, Japan modified the flag in 1999 to officially centered the sun on the white field.