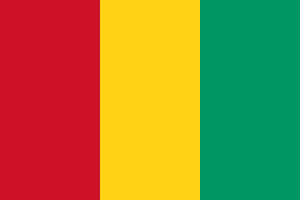 The flag of Guinea consists of a vertical triband of red, yellow, and green. Red represents the blood of the those who died from slavery and war, yellow represents the sun and wealth of the country, and green represent vegetation. These colors, which are similar to many other African countries, were adopted from a political movement in Africa that gave many countries, including Guinea, their independence. This flag was adopted on November 10th, 1958.

See this flag and more in Flagsplosion, an endless flag identifying quiz. Now available on Steam and Google Play!