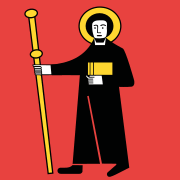 The flag of the Swiss Canton of Glarus consists of an image of Saint Fridolin von Säcklingen carrying a golden nimbus and book on a red background. Believed to have lived in the 6th century, Saint Fridolin was an Irish monk who is said to have had a great influence on the region. The use of his image on flags began in the 15th and 16th century during the Battle of Näfels, when the people of Glarus fought under a banner of Fridolin when their old banners had been captured. As is the case for all the Swiss Cantons flags and the flag of Switzerland, this flag has a ratio of 1:1, and is considered the official flag of Glarus since they joined the Swiss confederation in 1352.

See this flag and more in Flagsplosion, an endless flag identifying quiz. Now available on Steam and Google Play!