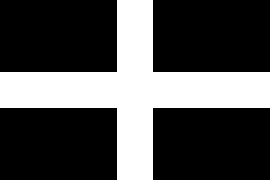 The flag of the English county of Cornwall consists of a white cross on a black background. This flag was the banner of Saint Piran, a 6th century Cornish abbot, and is recognized as the national flag of Cornwall. Although there are claims of the use of this flag as far back as 1188, the earliest solid evidence is found in a 1838 work called The Parochial History of Cornwall.

See this flag and more in Flagsplosion, an endless flag identifying quiz. Now available on Steam and releasing on Android on August 9th!