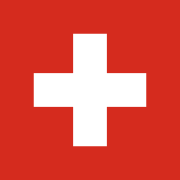 The Swiss flag is square and consists of a white cross centered on a red background. This flag is derived from a banner of the Holy Roman Empire and is historically connected to Christianity. Traditionally, it has been said to represent freedom, honor, and fidelity, but more recently has been said to represent neutrality, democracy, peace, and refuge. This flag was adopted in December of 1889.

See this flag and more in Flagsplosion, an endless flag identifying quiz. Now available on Steam and releasing on Android on August 9th!