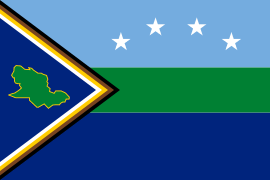 The flag of the Venezuelan state of Delta Amacuro consists of a dark blue chevron on the left with a yellow bordered green shape of the state in the center. The chevron has a fimbriation of the colors of white, yellow, brown, and black. The remaining portion of the flag consists of three bands of light blue, green, and dark blue with the green band half the height of the two blue bands. Lastly, on the top light blue band there are four white five-point stars in a arc. Light blue represents the sky, dark blue represents the bodies of water in the state, and green represents the vegetation. The four white stars represent the four municipalities the state is divided into: Antonio Díaz, Casacoima, Pedemales, and Tucupita. This flag was adopted on October 14th, 2004.