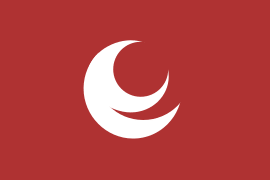 The flag of the Japanese Prefecture of Hiroshima consists of a white stylized Katakana character on a red background. The character this flag design is based on is called ‘Hi’, which is written as ヒ in Katakana, and which is also the beginning of the Prefecture name. This flag represents harmony, cooperation, and progress, and was adopted on July 16th, 1966.