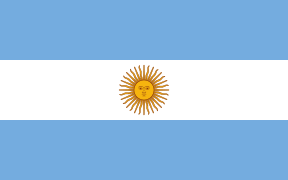 The flag of Argentina consists of a horizontal triband of blue, white, and blue, with a yellow Sun of May in the center. A similar flag to this was first used on February 27th, 1812, during the Argentine War of Independence. It was created by Manuel Belgrano when he realized both sides of the war were wearing the same colors, thus he made several new national symbols including the design of this flag. While several versions of this flag existed since 1812, this specific design was officially adopted in 1861.