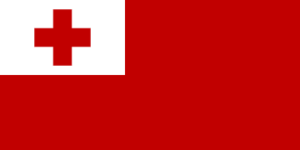 The flag of the island nation Tonga consists of a red cross on a white rectangle in the top left corner on a red field. The red cross represents Christianity, the religion of about 97% of the population of the island. White represents purity and red represents the blood of Christ, which he shed on a cross during his crucifixion. This flag was officially adopted on November 4th, 1875.