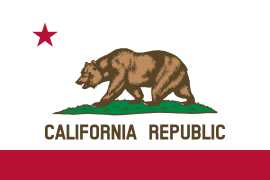 The flag of the US state of California consists of an image of a grizzly bear walking on green grass above the words CALIFORNIA REPUBLIC on a white background. Also include on the flag are a five-point red star in the top left corner and a red band at the bottom of the flag. The bear is modeled after a California grizzly bear named Monarch that was held in the Golden Gate Park zoo. The star represents sovereignty, red represents courage, and white represents purity. A similar flag to this was first used in Sonoma on June 14th, 1846, when a small band of settlers used it to declare their independence from Mexico. This flag was officially adopted on February 3rd, 1911.