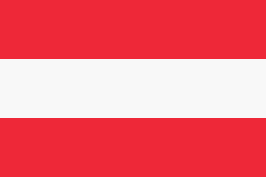 The Austrian flag consists of three horizontal bands of red, white, and red. This flag is based on the 13th century coat of arms of the Babenberg dynasty. Legend has it that Duke Leopold V fought so valiantly in the Crusades for the Holy Lands in the Battle of Acre that he was completely covered in blood. When he took off his belt there was a stripe that remained white, revealing the combination of red white red. This flag was officially adopted as national flag from 1918 to 1933 and then re-adopted on May 1st in 1945.