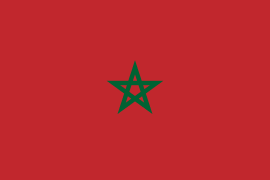 The flag of Morocco consists of the green outlined five point star on a red background. Red is a significant color of Morocco, representing the ruling family Alaouite which are direct descents of the Islamic prophet Muhammad. Red also represents strength and bravery, green represents peace and hope, and the five point star represents the five pillars of Islam. This flag was adopted on November 17th 1915, it was preceded by a plain red flag which was used since the 17th century.

See this flag and more in Flagsplosion, coming to Steam on June 28th 2017.