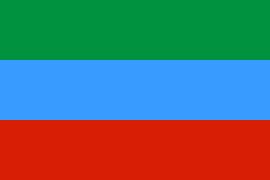 The flag of the Russian Republic of Dagestan consists of a horizontal triband of green, blue, and red. Green represents life and is a traditional color of Islam, blue represents the sea and the greatness of the people, and red represents democracy and bravery. This flag was adopted on February 26th, 1994 and its dimensions were changed from 1:2 to 2:3 on November 19th, 2003.