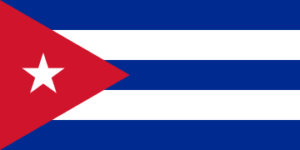 The flag of Cuba consists of five stripes of alternating blue and white and a white star on a red triangles on the left side. The three blue stripes represents the three districts the country was divided into in the mid-19th century, while the white stripes represent purity. The red equilateral triangle represents equality and the white Lone Star represents strength, beauty, wisdom, equality, and solidarity. This flag was based on the United States flag and was adopted on May 20th, 1849.