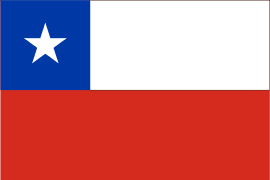 The flag of Chile consists of two horizontal bands of white and red, the top white band being shorter as to fit a blue square with a white star in the center. Blue represents the sky, white represents the snow and the Andes mountains, and red represents the blood of those who died in their fight for independence. This flag is based on the flag of the United State of America and was adopted on October 18th, 1817.