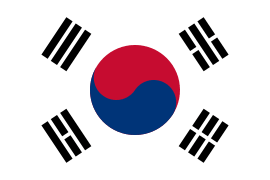 The flag of South Korea consists of a red and blue Taegeuk on a white background with four black trigrams in each corner. The Taegeuk is a traditional Korean symbol of interlocking spirals in the form of a circle, commonly associated with Taoism and shamanism, represents the balance of the universe. Each of the four trigrams have multiple means, some of them being the seasons of the year (spring, autumn, winter, and summer), the four cardinal directions (north, south, east, and west), the four virtues of humanity (humanity, justice, intelligence, and courtesy), and the four elements of nature (air, fire, water, and earth). The flag’s white background represents peace and purity. This flag has gone through many adaptations but was first adopted on January 27th, 1883.