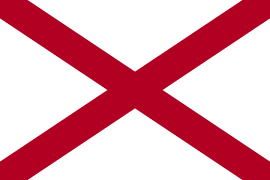 The flag of Alabama consists of a red diagonal cross on a white background. This flag is patterned after the battle flag of the Confederate States of America. Many troops from Alabama fought for the Confederacy during the United States Civil War. By law, the flag must be at least 6 inches along the diagonal. As such, small representations of this flag are not technically flags of Alabama. This flag was adopted on February 16th, 1895.